Xavier Gras is part of the Intensité group founded by Olivier Wahl, which now includes three exhibition laboratories that share the same artistic values. He supports art through process, developing critical and creative thinking on an inspirational platform for artists to bring their thoughts and practices to fruition in creating their art.

‘L’Instant Ephemere’ ‘Happiness is in the moment’, is a group exhibition of photographic artists who are contributors to the second ’Instant Ephemere’ exhibition. The goal of the exhibition is to facilitate photographers and visual artists to exhibit the “state” of their artistic research and creation during five days around a common intention: “To seek the author!”

Gilles Petit-Gats, photographer and author, will lead and coordinate this essential work of reflection. He proposes that the artists think about: bringing to the spectators the extra curiosity, astonishment, interest and therefore enthusiasm that the discovery of images conceived and exhibited by artists who would not only define themselves as sensitive or technically perfect photographers, but as authors. Authors in the situation of creating a work built on an artistic strategy, presenting works in such a way that the spectators would understand the coherence, the general inspiration, and see the spark that set the creation on fire.

Karen Ghostlaw: A Page In Time

Karen Ghostlaw, a Hudson Valley resident of New York State has answered this call through the exploration of reflected spaces seen in her layered frames of self-portraiture. Self-Portraiture has been an ongoing study and source of inspiration for Karen for over a decade. ‘A Page In Time’ is an expression of self, witnessed through reflectivity and the intricate spaces found within reflections. Karen has taken this series of abstracted self portraits during the pandemic. She reflects on the way in which she interacted with her environment and how that changed, and how we all adapted to the new confinements of the pandemic became the inspiration for this exploration. As the world was adapting to the challenges of Covid, Karen found that isolation was unavoidable and her personal space became very important if not mandatory. They are reflections of her steps moving forward, finding inspiration in new ways of seeing. Each photograph an archeology of pieces of the past, that are reflected in the present, creating the abstraction of the future. They reflect the metamorphic evolution of change of personal reflection and growth. The study has culminated in a large scale accordion book that stands 3 feet high x 2 feet wide that unfolds around you revealing the layers in her work.

The goal of this exhibition is to make a qualitative leap in the experience of exhibiting thanks to exhibition conditions that stimulate the creativity of each participant. Paris in November is a wonderful time and opportunity presented to Karen to develop her new project and progress in her art. 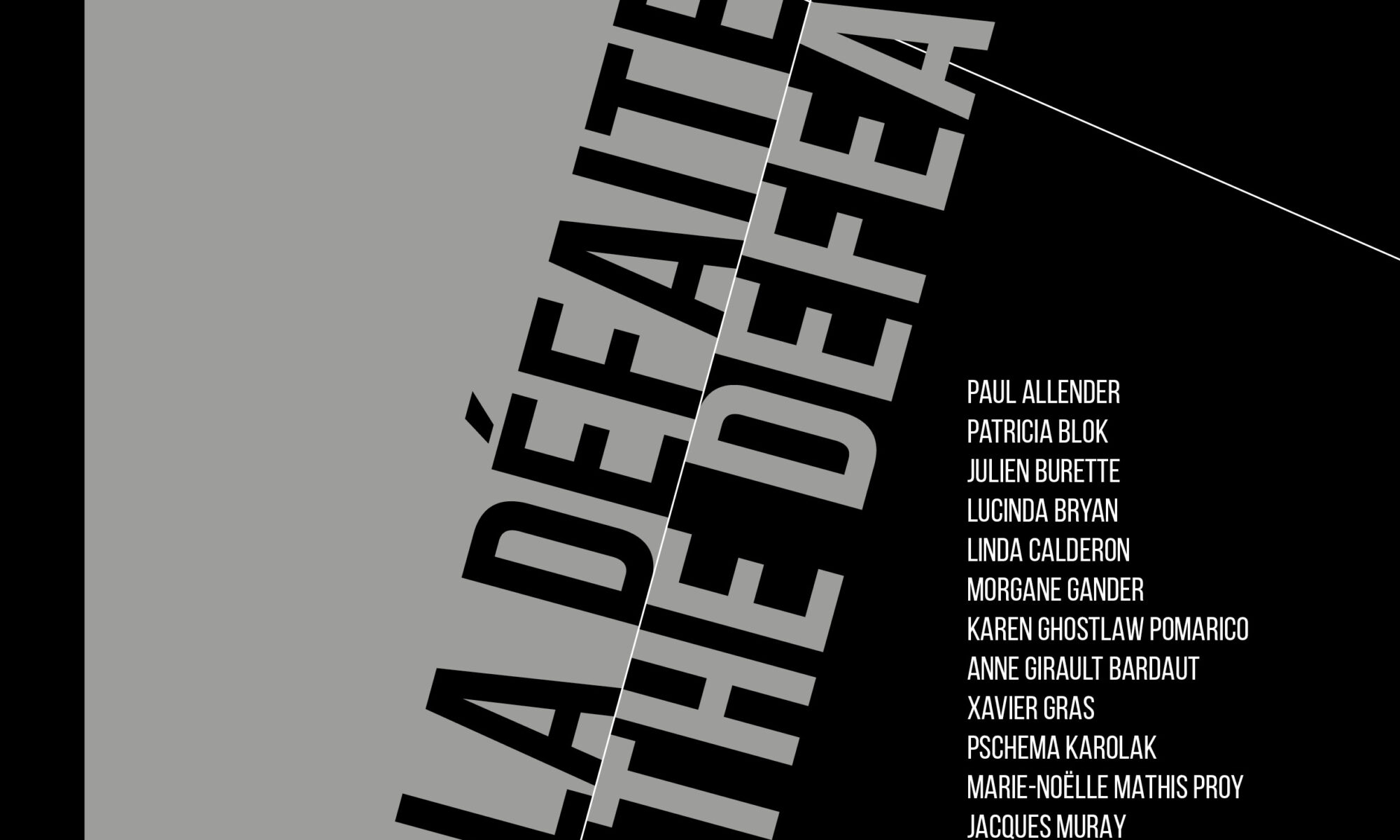 Xavier Gras, organizer and curator of Galerie Le bonheur est dans l’instant, 72 Rue Amelot, Paris. Xavier Gras is part of the Intensité group founded by Olivier Wahl and which now includes three exhibition laboratories that share the same artistic values”. He supports art through process, developing critical and creative thinking on an inspirational platform for artists to bring their thoughts and practices to fruition in creating their art.

This is a multidisciplinary thematic exhibition, a partnership and collaboration between  Défriche, a quarterly cultural magazine, and Le Bonheur est dans l’instant , an art and essay gallery. This partnership takes the form of an exhibition and a special issue of the magazine, both of which will deal simultaneously and in mirror image with the theme of Defeat.

News of the Supreme Court’s Decision to overturn Roe versus Wade fell hard on the women of New York on June 24, 2022. Defeat for Women depicts the reaction to the news, negating the federal constitutional right to an abortion reaching the ears, breaking the hearts of many. I saw women taking seats, trying to find breath, dizzied in disbelief that this could have happened. Within hours 17,000 people gathered in NYC’s Washington Square Park, sprawling out into the adjoining neighborhoods, calling for liberty, demanding free choice, insisting on  basic human rights for women. It was an emotionally charged event, inclusive of all that wanted to participate. Women of all ages, all cultures, stood side by side, shouting, crying, empowering, an energy that embodied all that was there, connected by a single common thread woven throughout all humanity, being a woman! ‘Women’, the single common factor that created strength in our unity. My camera became my voice, each click of the shutter a cry for justice. I was not documenting but participating, as a woman in protest for change, in solidarity with all that were there, having a voice for those who were not. This Book represents the linkage we share, the bond that will give us the courage and strength to fight for our basic rights as women in a free democratic society.

Defeat is the seed for change, the inspiration to find strength through conviction, creating the power to motivate and communicate. I see defeat as a connective, collective energy. A fiber optic thread weaving through humanity, communicating, and translating intellectual and emotional charges, into powerful motivation for change. The common scars we bear become inspiration to create a better future.

Defeat International exhibition, meets several objectives to create a complete event: plastic, visual and written, which gives priority to artistic research, attempts and trials. To de-compartmentalize different media around the same theme. These works were all created specifically for this occasion, breaking down the barriers between readers, spectators, art lovers, students and artists, philosophers, journalists etc.

Join in the experience and help make it unique, November 15-20, 72 Rue Amelot, Paris, France. There will be an official opening event as well as a discussion on philosophy and defeat and Olivier Wahl will discuss his new film.